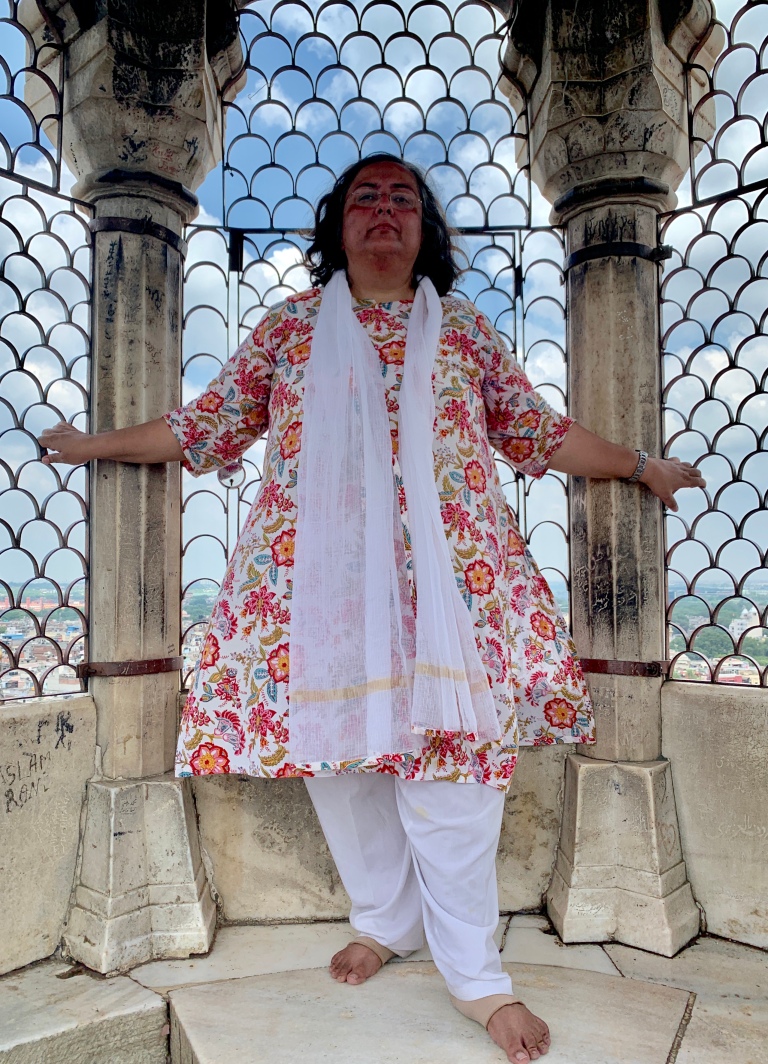 And so it has finally happened. There was a huge lacuna in my Shahjahanabad portfolio. I had never been up the Minar. It was more or less impossible for me given the condition of my knees and ankles. So I was never going to gaze at my beloved shehr from those heights. I was never going to see the spectacular vistas with my own eyes. But recently Ranaaapa made the trip up and I was yet again obsessing with it. I did not think I could go up but I resolved to go to the base of the minar. This is also two very steep floors up. And so we went. My jaw defiant as the ticket seller looked most doubtful. Aap jaaoge? No, no. I am only going up to the base of the minar I said miserably.

Huffing and puffing up we went up – Mohammad and I. It was a crystal clear morning. Brilliant blue skies and no haze. If ever there was a perfect morning to go up, it was this. But I was not going. I was only going up to the base. Then I thought why not climb the last six steps which lead to the entrance of the minar and peep? So with a very annoyed Mohammad behind me, I climbed up the little iron ladder and started peeping. An extremely narrow spiral was what stared back.

Should I try climbing a few steps I wondered? The way to go up and down is the same. The man at the entrance was kind. Aap dheere dheere chale jao. Agar koi peechhe se jaldi machaye toh pressure mat lena. Before I knew it, I had started climbing up. Everytime someone passed me on their way down it was a nightmare. I would push up and they would push down. But everyone was very kind. And kept encouraging. Bas thoda aur. Ab aadha toh ho hi gaya.

Halfway there is a little alcove where one person can stand without blocking the entire line going up behind. I stood there for a long time trying to breathe. Then I thought at least I will go to heaven if I die in a mosque. On that cheerful note we began again. Until I finally reached the top. Which indeed is jannat. I have never seen my beloved city so beautiful. So breathtaking.

Even the top is very narrow. A tiny platform in the centre and a little ledge around the windows. And it was crowded. But I was very lucky. I reached up at about 12 noon. At 12:30 they close till 2:00 pm. So they started asking people to climb down. Soon enough the very crowded top starting emptying. I had explained that I had to be the last one to climb down or else the entire queue would get held up by my slow speed. So until the last person left, no one asked me to move. At that height, with the cool breezes caressing us, with spectacular vistas of my beloved Shahjahanabad all around me, my happiness was complete.

Finally I left to return to terra firma. The feet were jelly. And I was limping for three days after. But the 122 steps were well worth it. I can’t wait to go up again.

Ps – do notice how red I had turned, like a tarbooz 😊